Heart disease is still a huge global health burden and remains America’s leading cause of death. Recent figures from the World Health Organisation estimate at least 17.7 million global deaths from heart disease in 2015 alone. Consequently, there is a great demand for cutting edge research into how to treat heart conditions.

One exciting development has come out of the Wake Forest School of Medicine in North Carolina. Researchers in the medical school have developed a way of ‘printing’ heart tissue using a technique that is gaining significant interest in the field, namely bio-printing.

As the name suggests, bioprinting is a general term used to describe the process of printing biological structures such as tissues and organs.

The process often involves precise printing of cells suspended in materials (known as ‘bioinks’) that can mimic properties of the tissue of interest.

Bioprinting can allow scientists to replicate complex biological environments with a great deal of precision and control.

As a result, it is now commonly employed in many areas of healthcare research.

In this study, award winning researcher Prof Anthony Atala and his group developed a bioink based on materials found in the human body. Rat cardiomyocytes (heart muscle cells) were suspended in the bioink and printed into precise structures.

The researchers found that their bioprinted heart tissues were able to contract and beat like a normal heart. When analysed further, they also found that the bioprinted tissues had a measureable ‘heart rate’ that was strikingly similar to the resting heart rate of a healthy human (around 80 beats per minute).

This alone is a significant finding for the field. However, an even more interesting result occurred when the researchers delivered two different drugs to the bioprinted structures, namely adrenaline and carbachol.

Adrenaline is often used to restart blood circulation in patients suffering a heart attack. It works by increasing a patient’s heart rate in order to get blood circulating back to vital organs. Carbachol, conversely, has the opposite effect and lowers heart rate.

Interestingly, when the researchers added both drugs to the bioprinted tissues, adrenaline increased the heart rate to around 110 BPM while carbachol reduced it to 40 BPM.

Much of the excitement around this study comes from how similar the bioprinted heart tissue is to its natural counterpart. The team are able to create a robust structure that can be used to study many mechanisms that underlie heart conditions.

The platform could, therefore, be used to trial new drugs for treating issues such as heart attacks. However, there is also the potential to use a system like this to gain a better understanding of how to prevent such serious, life-threatening conditions from manifesting.

Fundamentally, that is what makes this study so exciting. The research group have developed something that has the potential to inspire scientists and drug companies to advance towards new treatments for serious heart conditions.

CECT Hosts 3D Bioprinting Workshop at the University of Maryland 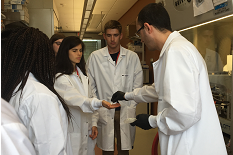